A very happy birthday to author Katharine Johnson, who tells us about a particular consequence of social anxiety in her own life and in that of a character in her novel, The Silence, which I loved.

Why I wrote about Selective Mutism

Thanks so much for inviting me onto your blog to talk about an issue that’s very important to me and one that (fittingly enough!) I’ve kept quiet about for a long time.

I chose the title for my novel The Silence (a psychological thriller set in England and Tuscany) for two reasons: it represents both the child Abby’s mostly non-verbal state and the adult Abby’s battle to keep her past secret. It’s the first of these situations I want to talk about today.

Selective mutism is usually combined with social anxiety and having experienced both myself, I wanted to show readers what it felt like and tackle some of the misconceptions that surround this disorder. Although my experience was back in the 1970s, my sister Rosie’s a speech therapist who’s an expert in social and behavioural disorders so I was able to make sure I had the most up-to-date information on the condition and treatments today and in 1991-1992 when this part of the novel is set.

Whereas Abby has very good reason for being non-verbal – the guilt over something she said being partly to blame for her mother’s suicide – my situation is much more common in that there wasn’t an obvious trigger. The uninteresting truth is that it stemmed from the shock of hearing my voice on a tape recorder for the first time when I was six. I can recall the moment with complete clarity, standing in a house in Germany while on holiday.  The voice I heard sounded so alien and I also realised in that instant why people were always asking me to repeat sentences like “saucy Susie sewing shorts for sailors” – I had a speech impediment that strangely had never registered in my own ears.

I’m sure these people never meant to be unkind (some were close relatives!). They found it funny and I suppose cute – but I was mortified. The result was that I stopped speaking in school and new situations. At home I was still noisy, out of the home I clammed up.

This apparent ability to be talkative on some occasions while refusing to talk on others makes it a hard condition for other people to understand or believe. Abby’s behaviour is frustrating and embarrassing for her father:

“You’ve got to start talking again some time. And don’t tell me you can’t because you’re talking to me now. There’s nothing wrong with your voice, it’s all in your head – it’s so bloody rude.”

The truth was, it frightened her too, sometimes, the grip the silence had on her. At first she had thought she had some control over it but gradually it rippled out to affect all sorts of people, even those who least deserved it. Once she felt it wrapping around her head, felt herself sinking into its depths, she knew there was no getting away.

“Are you even going to stop talking to me one day?” Her heart clenched at the tiny break in his voice.

“I do try,” she said at last although her voice was little more than a whisper. “Sometimes I can’t. It’s like a scarf wrapping round my neck.”

Although the scarf turns out to have a significance in the story, not talking isn’t a choice Abby makes – she feels physically unable to do so. People react to this in different ways – by getting angry like her father, finding it “spooky” like her stepmother, or by trying to jolly her out of it like her uncle when she first arrives at Villa Leonida:

“Will you shut up? You’re giving me a headache.”

“These approaches are very unlikely to work,” says Rosie. Neither is telling the child to “snap out of it.” They can’t.

Fear of other people’s expectations is a common trigger, which is one of the reasons for Abby’s father sending her to stay with his sister’s family in Italy. Being foreign is helpful to Abby in that the local people have no expectations of her but it’s still a problem within the English family she stays with.

When she first meets her uncle:

those first few moments with someone were crucial. Either she’d find her voice or she wouldn’t. If she didn’t speak to him immediately, she never would.

But it’s different with her cousin Philippa. Whereas other people assume that because Abby says nothing she has nothing to say, Philippa’s intrigued by it.

“Why do you pretend you can’t talk?”

Philippa grinned, clearly not convinced. “It’s driving Dad bonkers. Whenever I try  I always forget and get caught out by a question.”

It wasn’t a reaction Abby had encountered before. Most people got impatient or angry. They tried to trick her into talking by insulting her or bribing her with money they clearly didn’t have. Once at school someone had wrenched her arm behind her back further and further to make her scream . Her vision had whited out, she’d seen stars and thought she could feel her arm being ripped out of its socket but despite the pain she hadn’t been able to scream. But Philippa seemed to view it as some kind of talent.

This partly explains the close friendship that grows up between Abby and Philippa and sets them apart from other people, which is important for the story but is also quite a common experience. 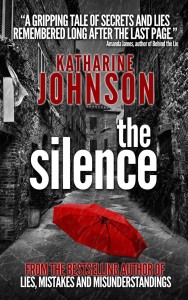 Over the next year, after transferring school and having speech therapy, Abby’s speaking improves although she still feels panicky and tongue-tied in certain situations. She describes her sessions to Philippa in letters – progressing from pointing to words or pictures to express a choice during the first term to the following term making a puppet nod or shake its head. At first her hand freezes even when asked to make the puppet squeak – selective mutism sometimes affects more than the voice, rendering the person immobile as well as non-verbal.

Gradually, she develops from whispering an answer into the ear of her trusted adult (her father) and then whispering from further away and eventually whispering to the speech therapist.

“I said a word in class today.”

Most children do grow out of it although the problem can continue into adulthood. As an adult Abby has it under control but when reintroduced to characters from that summer at Villa Leonida she panics that she won’t be able to speak.

And me? I mostly have it under control (to the extent people probably think I made the whole thing up) although to my shame in three years at university I never spoke up in group tutorials – what a waste!

So I was heartened the other day when I went to an Open Day at Bristol University with my daughter. The speaker for the Philosophy department said they absolutely recognised social anxiety. Students who didn’t feel able to do a presentation could either record themselves doing so or just write a script.

I know there’s still room for improvement but I think this shows what a long way people have come in understanding the issue.

Thank you, Katharine! That’s really interesting and goes a long way to explaining a confusing problem. I also didn’t speak in group tutorials. Presentations weren’t part of the curriculum in those days, although I’d probably have managed them.

Doctor Abby Fenton has a rewarding career, a loving family, an enviable lifestyle – and a secret that could change everything. When human remains are found in the grounds of an idyllic Tuscan holiday home she’s forced to confront the memories she’s suppressed until now and relive the summer she spent at the villa in 1992 – a summer that ended in tragedy. The nearer she gets to the truth the closer she comes to losing her sanity. In order to hold onto the people she loves most, she must make sure they never discover what she did. But the reappearance of someone else from that summer threatens to blow her secret wide open.

Katharine Johnson is the author of three novels and a non-fiction book. A journalist by training, she writes about ordinary people who through a bad choice find themselves in nightmarish situations. She lives in Berkshire, England and has a ramshackle cottage in Tuscany which is nothing like Villa Leonida. Her fourth novel, The Suspects, will be out later this year. When not writing she’s likely to be found with a book in one hand, a cake in the other or walking her spaniel while plotting her next novel.

Katharine has appeared on this blog twice before, in The Allure of Secrets and when she brought Irena to Letters from Elsewhere.

Do you want to write (or talk) about one or more of the SIM topics – Social anxiety, Israel, Misunderstandings? The details are here.

That’s a really interesting post, which rang bells for me. I could talk at home or with a certain number of friends I was used to, but not with other people. At a hostel where I lived for a while, another resident (who was a teacher!) was nasty to me because she’d seen me chatting to a friend who visited. ‘I know it’s not as if she can’t talk because I saw her the other night, so there’s no reason why she never speaks to us.’ I know I had painful shyness which veered into social anxiety, but now I’m thinking, ah, yes, I had selective mutism. But it wasn’t that I was completely non-verbal with others; if someone said ‘good morning’ to me I could answer or if a teacher, or anyone for that matter, asked me a simple question I would reply, but I couldn’t initiate conversation or speak out in class discussions. I’m much better at this now but some of the problem remains. It’s great the way issues such as this can be brought into public awareness through both fiction and non-fiction. I love issue-based novels. Thank you to Katherine for sharing this.

Yes, I recognise that fear of initiating rather than responding, Jean!

Reblogged this on Crooked Cats' Cradle and commented: