The wonderful, amazing, one-of-a-kind Ailsa Abraham, who often goes by the name of Otter, chose me as the winner of her competition at my recent launch party for my new book: Social Anxiety Revealed.

I chose to win one of her short stories. For the topic, I chose a socially anxious otter, of course. Here’s the result, sweet and satisfying and… probably with an underlying message. What do you think?

Ask anyone what their first reaction to the word “otter” is and 75% or more will say “playful”. This is usually correct. They are one of the few mammals who still play as adults, just for fun, not developing skills but enjoying each other’s company.

This is why a very small female otter was so different. She had been the runt of a very large litter and never gained full mature size so was easily bullied by her four brothers. This meant that she also went without food a lot of the time which didn’t help her growth. 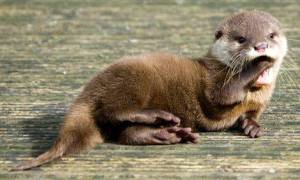 She sat on the riverbank, desperately wanting to join in the mud-slide game, knowing how it was played but too timid to try. One after the other, her brothers slid down the mud, cleaving gracefully into the water, emerging spitting and laughing. Her empty tummy turned over. She wanted to slide. She should slide, it was what otters did. It was her right to slide. The rest of the “romp” were casting sidelong glances at her odd behaviour.

Grabbing the moment when her courage was highest and her self-doubt squashed, she launched herself at the mud-slide just as an elderly matron otter was wiggling her bottom to get traction to start off. The two of them became a tangle of legs, tails and frantic squeaking, rolling over and over to make a resounding splash as they hit the river with anything but grace.

The elderly female had produced several litters and was forgiving of the clumsy youngster but the little otter swam away, disgusted with herself. She had tried to join in and had nearly killed someone respected in the community. She would go hunting. She was hungry and the one thing she could do very well was a solo activity. She was happiest when catching fish, finding a concealed spot on the bank and stuffing her belly.

From there is became a fear with her of standing out. She remembered the whole group looking at her in disbelief and never wanted that to happen again. She had a small number of females of a similar age who would tolerate her but in general she kept to herself, which is how the accident happened.

As the others were playing at chasing butterflies and the little otter knew she would just be in the way, trip them up or fall on her back, she wandered off to stray into Man land. She had been told to avoid humans as they were usually trouble and their “rolling feet” were always fatal in the end. She found herself by one of these rolling feet paths and lay, terrified by the monsters as they rushed past. She could smell a good place on the other side of the path, what little she could smell over the stink of their bums! It called to her and she dashed out to cross the path just as a monster appeared out of nowhere. It did not hit her but the rush of air knocked her over and she bumped her head on the hard ground.

When the little otter woke up she was in a very strange place that smelled of many different animals, Man and very clean stuff. Raising her head she saw hard things like reeds in front of her face. Putting up a paw she felt them, cold, solid and immoveable. She was surrounded and trapped by the hard reeds and she began to cry. Next to her, in another set of hard reeds, was a cat. She knew cats. They came by the river to hunt rodents and never bothered the otters. The cat was difficult to place, male or female and its voice was drowsy.

“No cry. All good here.” That was all she could make from its mewing.

“I am frightened. I want my holt. Want my… my …group.” She didn’t say friends because she didn’t have any. The last word came out as a hiccup and she didn’t think the cat would understand.

“I had go-to-sleep-milk. Will be well. Man come touch you. All well.” The cat dozed off again, his head against the hard reeds, so the otter put her paw through them to keep contact. Her fingers rested on his whiskers and she felt comforted. It smelt male but not quite male.

She must have gone to sleep herself then because the next thing she knew a human face was on the outside of the hard reeds, looking in at her and squeaking, softly. The noises made no sense to the otter but the feeling coming off this one with female smell was “mother”. She dared to look at the face and saw no teeth bared but the eyes were squeeze-shut like a cat’s when it is happy. The little otter poked a paw out between the hard reeds and squeaked “lonely” at her. The cat was awake and said

The little otter had never bitten anyone in her life, apart from fish, so when the human put a paw in to pick her up, she just curled into a ball and trembled. She found herself next to the female’s chest being stroked and hearing small, comforting sounds. It was like being in her litter with her brothers but she had this body all to herself. She found herself nestling in and being at ease.

As soon as I walked into the post-op room and saw Sarah holding the otter, I knew exactly how it would go. It so often did. She was a one-woman walking animal rescue centre and we sometimes wondered how she managed it on her salary. We often paid her overtime in animal food and she said that now her two boys were off her hands she had plenty of pocket money. Perhaps the animals filled the gap left by them.

“Well now…is this an adoption I see before me?” I wondered.

“Sorry, Geoff, she was being unhappy and I had to hold her. Look, she’s quite contented now.”

“So would I be in her position!” It was a standing joke in the surgery that Sarah’s breasts came around the corner a minute before the rest of her appeared and she laughed, good-naturedly at my jest.

She popped the young otter on the table for me to examine again, gently resting her hands on its neck to stop it running away.

“No damage from the accident but look here, I’m sure her eyesight is poor. She seems uncoordinated.  I wonder if she is a runt that shouldn’t have survived?” I shone the light into the animal’s eyes, then encouraged it to walk a few steps. “I really don’t know if we could risk putting her back, not smelling of vets and a bit wonky.” Sarah’s eyes met mine above the table. We both knew.

“Well, in that case, I’ll take her home with me and keep an eye on her. We don’t have the cage space here for her. If she looks any better I’ll bring her in and if you think it’s right, we can return her to the wild.” Sarah said as she scooped the otter up into her arms, its head on her shoulder again.

“Looking at how she’s taken to you, I doubt very much that she’ll want to.” I turned to leave the room adding, “Take some fishy cat food with you. Your new guest is going to need feeding up, she’s tiny.”

The little otter had finally found a friend and in that friend’s house, a new group to which she could belong. Different animals with different handicaps, all a bit wonky but all loved to bits. There she could socialise and feel at home.

Thank you so much, Miriam. It was a pleasure to write for you and I’m glad you liked it. Of course there’s a message… always is! hahahhah

Thank you – all my stories have happy endings.