Today’s guest speaks to me from Africa and is brought by Jane Bwye.

Thank you for having me, Miriam, and letting me come alive from the pages of Breath of Africa.

You ask me to speak for myself? Where shall I start…

My birth name was Charles Omari Ondiek and I was born in a remote village called Amayoni (which means birds) in a beautiful pocket of tropical forest in the western region of Kenya.

But I’ve used different names in the course of my tumultuous life. At Oxford, I was known as Charles (yes, as a student more mature than most, I graduated in Politics, Philosophy and Economics from that venerable university in the early 1960’s).

But when I returned home and started a career in journalism I had to cover my tracks for fear of being discovered by Mwangi, a Mau Mau oath-giver who’d placed a curse on my family. So I called myself Ondiek, a name which is shared by very many people. I still shudder to think of that curse, and the fear which consumed me. Mwangi caught up with me eventually, and I was left for dead. That is where the book left me, gasping to catch up with my only son, whose mother had already succumbed to the potent curse.

My son, half black, half white, was intensely angry because I changed my name again, and disappeared.

Oh – what a tangle of events and emotions we separately went through. And now in the evening of my days, I am Charles again, looking back and wondering what might have been – could have been, if…

But it’s no use looking back, however much we are tied to our grass roots. That’s why you should also read Grass Shoots, the working title of my creator’s next book.

Kenya, my country, continues to stumble along through the impediments of violence, politics and corruption. Is it making progress? What you think depends on who you are and what you mean by progress…

Thank you, Charles. I have read your story in Breath of Africa and was moved by it.

About Breath of Africa

Dedicated to the people of Kenya, BREATH OF AFRICA is a novel by Jane Bwye, retired businesswoman and intermittent freelance journalist who lived over half a century in Africa.

After the 2013 elections and the Westgate siege, Kenya moves on in hope, epitomised in the book, which means different things to different people; it can be read as a love story, a psychological thriller, or as an exploration into the interactions of people of different races. Superstition and Christian faith clash. And the stunning beauty of the country is a major character in itself.

Caroline is a privileged woman from the highlands, and Charles Ondiek, a farm labourer with dreams of Oxford. A drama of psychological terror is fuelled by Mau Mau oath administrator, Mwangi, but against the backdrop of Kenya’s beautiful but hostile desert, the curse is finally broken.

Jane has been a businesswoman and intermittent freelance journalist for fifty years, mainly in Kenya.

Six children and seven grandkids are scattered over three continents. She developed a taste for travel, and in 2001 “walked” round the world, buying a bird book in every country she visited. She has written numerous magazine articles and short stories, two newspaper columns and several newsletters. She co-ordinated a cookbook, “Museum Mixtures” in aid of the Kenya Museum Society in 1989, and has written a History in commemoration of the fiftieth anniversary of her local church, St. Wilfrid’s. Breath of Africa is her first novel, published in 2013. I Lift Up My Eyes, published in 2014, is a novella set in East Sussex.

Jane has managed her own Guest House and Riding School, and worked as a freelance Secretary. While home-studying for a degree, she started a consultancy business, providing human resource and computer advice, locum services for small businesses, and doing Organisation Reviews and Project Management for leading Management Consultancies in Kenya.

After graduation in 1995, she became Head of Computer Studies/IT at Hillcrest Secondary School, Nairobi for five years.

From 2002 Jane has operated her own consultancy in Eastbourne, UK, mentoring small business start-ups as an Associate of EDEAL.

I’m not here. That is… I’m somewhere, but I’m not around as I should be to announce my guest post on Jane Bwye’s blog. Jane, who has lived for most of her life in Kenya, is the author of Breath of Africa, a novel dedicated to the youth of Kenya.

My guest post is about Toastmasters, which I joined recently. You can find it here. If it’s not there yet, it soon will be. And it’s partly to celebrate my birthday, which was yesterday.

William McGuire “Bill” Bryson, OBE, FRS (born December 8, 1951) is a best-selling American author of humorous books on travel, as well as books on the English language and science. Born in America, he was a resident of Britain for most of his adult life before returning to the U.S. in 1995. In 2003 Bryson moved back to Britain, living in the old rectory of Wramplingham, Norfolk, and served as chancellor of Durham University from 2005 through 2011.

Bryson shot to prominence in the United Kingdom with the publication of Notes from a Small Island (1995), an exploration of Britain, and its accompanying television series. He received widespread recognition again with the publication of A Short History of Nearly Everything (2003), a book widely acclaimed for its accessible communication of science.

Sue Barnard lives by the principle that an immaculate house is a sign of a wasted life. Hence, her house is chaotic but her life is very fulfilled.

After graduating from Durham University with a degree in French, Sue had a variety of office jobs before becoming a full-time parent. If she had her way, the phrase “non-working mother” would be banned from the English language.

Since then she has had a series of part-time jobs, including some work as a freelance copywriter. In parallel with this she took several courses in Creative Writing. Her writing achievements include winning the Writing Magazine New Subscribers Poetry Competition for 2013.  She is also very interested in Family History. Her own background is stranger than fiction; she’d write a book about it if she thought anybody would believe her.

The Ghostly Father was published by Crooked Cat Publishing on 14th February, 2014. 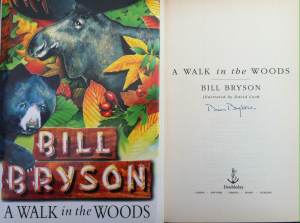 You may have noticed from the above that the link is Durham University. Sue studied there from 1974 to 1977. Bill Bryson was its Chancellor from 2005 to 2011. In addition, Sue has a signed copy of one of his books and she sent me a photo of it.

Thank you, Sue. Some time in the future you should write a memoir and people will have to believe you.

Enid Algerine Bagnold, Lady Jones, CBE (27 October 1889 – 31 March 1981), known by her maiden name as Enid Bagnold, was a British author and playwright, best known for the 1935 story National Velvet which was filmed in 1944 with Elizabeth Taylor.

She was born in Rochester, Kent, daughter of Colonel Arthur Henry Bagnold and his wife Ethel Alger, and brought up mostly in Jamaica. She went to art school at the school of Walter Sickert in London, and then worked for Frank Harris, who was also her first lover.

She was a nurse during World War I, writing critically of the hospital administration and being dismissed as a result. She was a driver in France for the remainder of the war years. She wrote of her hospital experiences in A Diary Without Dates and her driving experiences in The Happy Foreigner.

Her brother Ralph Bagnold founded the Long Range Desert Group (LRDG) during World War II, a precursor of the SAS.

In 1920, she married Sir Roderick Jones (Chairman of Reuters) but continued to use her maiden name for her writing. They lived at North End House in Rottingdean, near Brighton, Sussex, (previously the home of Sir Edward Burne-Jones), the garden of which inspired her play The Chalk Garden. They had four children. Their great-granddaughter is Samantha Cameron, wife of the United Kingdom’s current Prime Minister and Conservative Party leader David Cameron.

Jane Bwye has been a businesswoman and intermittent freelance journalist for fifty years, mostly in Kenya. She cut short an

Oxford career to get married, was widowed in her early twenties, and left with three small children – but was lucky enough to remarry. Now her six children and seven grandkids are scattered over three continents, so she’s developed a taste for travel. She has “walked” round the world, buying a bird book in every country she visited.

She has edited a cookbook, “Museum Mixtures”, in aid of the Kenya Museum Society, and is working on a short History of her local church. Her first novel, Breath of Africa, which is dedicated to the youth of Kenya, had a gestation period of thirty years. The plot and characters are fictitious, but the story draws on Jane’s experiences in a country going through the throes of re-birth.

Jane says of Enid Bagnold, “She lived just up the beach, in my county, East Sussex, and we share a love of horses: her novel ‘National Velvet’ was a favourite of mine as a child.”