The story of Judith and Holofernes is told in the Apocryphal Book of Judith (a text not  included in the Jewish canon but preserved in the Christian tradition). The story’s plot develops in the context of Nebuchadnezzar’s military campaigns against his neighbours, including the nation of Israel. Under the command of Holofernes, the Assyrian army besieges  the Jewish city of Bethulia and cuts off its water supply. When the thirst becomes unbearable, the town elders decide to surrender to the enemy. At this critical point in the story, Judith, a wealthy widow famous for her beauty and wisdom, appears on the scene. Rebuking the town elders for their  lack of faith, she bravely sets out with her handmaiden for the enemy camp, plotting Holofernes’ downfall. The Assyrian commander is captivated by her beauty, and invites her to his tent. During a feast in her honour, Judith gets Holofernes drunk and, while he sleeps, takes his sword and decapitates him. Carrying the severed head, she returns victorious to Bethulia. Holofernes’ death horrifies the enemy camp and the Assyrians flee in terror with the Israelites at their heels.

So says just one paragraph of a brochure I received from Esther, one of the members of my writing group. The brochure dates from 1997 and accompanied an exhibition in the Israel Museum, Jerusalem of Gustav Klimt’s masterpiece known as Judith I.

The brochure goes on to explain that Judith has been depicted in different ways over the centuries: as the the triumph of good over evil, of virtues over vices, of freedom over tyranny; and also as a sinful woman who dared to use her sexuality as a weapon.

In 1901, Klimt shocked the Viennese critics and public with the daring eroticism of his painting Judith I. Despite the title, viewers were unable to reconcile Klimt’s interpretation with that of the modest Jewish widow and courageous heroine from the Book of Judith. It was assumed that Klimt had really meant to depict Salome, a favourite femme fatale of turn-of-the-century artists such as Franz von Stuck, Gustave Moreau and Aubrey Beardsley (who illustrated Oscar Wilde’s play Salome). Aware of his departure from artistic tradition, Klimt modelled the rounded mountains and stylised date palms in the background after an Assyrian relief, in order to connect the figure to its Assyrian context. In addition, he inscribed the names Judith and Holofernes on the ornate picture frame made by his brother, Georg.

Klimt created the sensation of a direct encounter with a living and breathing femme fatale by realistically rendering Judith’s face, body and arm. This style contrasts with the geometric, two-dimensional decorations on Judith’s clothes and in the background. Judith’s destructive potential, reflected by Holofernes’ severed head, is encountered by Klimt’s powerful mutilation of Judith’s figure conveyed by the jewelled collar separating her head from her body, and the composition that cuts her off below the navel. Sexual ecstasy is expressed through Judith’s half-closed eyes, parted lips, semi-nudity and her hand that caresses Holofernes’ head. This ecstasy is particularly unsettling as it results from the assassination of her partner. The pairing of sexuality and death (Eros and Thanatos) fascinated not only Klimt, but Freud and many other members of European society at the end of the nineteenth century.

Klimt’s model for Judith was probably Adele Bloch-Bauer, the Jewish wife of a wealthy Viennese banker, whose 1907 portrait by Klimt became the subject of the 2015 film, Woman in Gold.

(continued in Klimt and Judith II)

The Women Friends is a series of novellas written by Emma Rose Millar and Miriam Drori, and based on the painting of the same name by Gustav Klimt. The first in the series, The Women Friends: Selina, will be published by Crooked Cat on 1st December, 2016.

Author of the Day

Esther Rafaeli is an amazing woman with an amazing history. Spanning ninety years, it hovers between the Land of Israel and Australia before settling here in Israel and bringing her into contact with many special people. Esther is full of surprises, the last one (up to now) being that despite a horrible fall, a very short time after her ninetieth birthday, leaving her lying on the floor for 36 hours, she couldn’t wait to get back home and start writing again. Her latest piece doesn’t describe the fall in detail, but lists the fortunate coincidences connected with the fall. I am in awe.

Update: It wasn’t 36 hours. It was 56! Also, I failed to mention Esther’s books, available on Amazon US, Amazon UK and elsewhere. 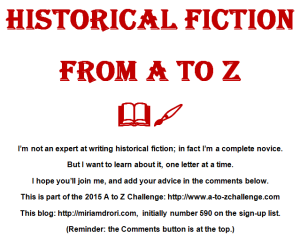 One of the best places to go to for some in-depth researching is a museum. You can find answers to your questions from the exhibits, on information boards, from computer screens, audio guides or human guides. Displays often show how ordinary people lived. Libraries contain books that provide specialised information and museum shops sell books and objects that can help you reconstruct the background to your novel.