Today’s visitor is one of a kind. He’s called Dougal and he’s decided to write one of those letters to his younger self.

You hated the thought of leaving the shores of Kent, the land of honey, Sky TV, siblings and mother’s milk for the unknown crime-ridden Metropolis, brim full to bursting with rules, vicious dogs and air pollution.

Have I loved and protected you, the puppy in me? Kept alive your aspirations, quelled your fears and led you sensibly down the passage of time, helping to curb your excesses, fulfil your dreams and discover your role in life? How to be a man’s best friend: helping him through the trials of life, be it flu, sad times or a self-induced hangover.

How have you fared? Has keeping a diary helped?

This particular date is forever etched in my memory.
16th May  (A quote from your diary at 5 months old)
Stonkingly good day! Terrified an entire nursery school and left muddy paws on the most elegantly-suited woman in the park. Once home I ate two brown socks, the tacks off the telephone wires, hacked through the skirting board, burst two footballs, was half-way through eating one of them and it wasn’t even lunchtime.

By 5 pm I’d eaten my lead, dug three large holes in the garden, chased next-door’s cat and chewed the leg off a chair. I’d call that, success.

Well, the good news is: you’ve stopped eating socks. A relief to the vet, your boss and dog minder, who had the pleasure of extracting a sock or three from out of your nether region…I need not continue, you get the picture? The details are too foul to go into. Maybe this is the moment to tell you more about you.

When you swapped Sky TV for the radio, you became less informed on Wildlife Programmes, but gained a greater knowledge about politics. And the big question now, is IN or OUT. Which for you, as a French speaker and Francophile, Paris and Brittany (Cité Europe is not on your wish list nor one of the 100 places you want to visit before you die) means you’re in. One of the very few to have actually made up their mind.

You didn’t die under the knife when your testicles were removed (the vet’s fault) nor did you gain the high notes of a counter tenor, but mercifully retained a deep baritone bark.

As you are aware, you survived a cliff-hanging incident (your fault) on the Thames. (Another diary entry, at 9 months of age.)

We were meeting Hannah in Barnes, not for the Boat Race – that we missed months ago. It was a blisteringly hot day and the tow path was heaving with families making the most of the weather. Next month London will be battening down the hatches, jumping into thermals and vegetating for the winter – a human habit caught from squirrels.

We sped along the path, river to one side, trees and back gardens on the other, dodging bikes, pushchairs and runners. They did, I didn’t.

‘Dougal, mind the baby. Oh, sorry, so sorry!  Dougal!’ I was high as a kite, charging through the dried leaves, my tail going like the clappers, as I sniffed dogs, chased cats and greeted every toddler going. Then, from the other side of the wall came the sounds of oars dipping in and out of the water, male voices, cries and laughter. The river was brimming with fun. I had to join in. With one Olympian leap, I was over.

Bonkers Dougal! Never underestimate the consequences of your actions. The water was only twelve metres below. Did I shimmy down the walls? No way. I dropped, one furry bundle of panic in free fall, my life vanishing behind me, the Thames looming ever closer, when a ledge, barely large enough to house a seagull, interrupted my descent. By some miracle I was able to grip. Thank the Lord I’d never had my nails cut.

Here, writing a diary helped you retain your sanity. 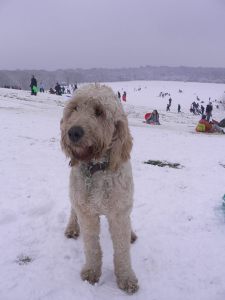 Now, what about me, the older you? I keep in shape and young at heart by chasing non-existent foxes in the garden, jumping higher than a kangaroo when catching balls and treats. And I love, really adore nicking ice-creams out of  babies’ prams. But as for my obsessions with balls and health, I’d prefer to leave them for another time.

So, back to you, young Dougal! What of your dreams of starring in a West End Show, of travelling the world on Virgin Atlantic, or cocking your leg without falling over? Did any of them ever come true?

Some of them, yes.

Always remember life is fun and you, my puppy, are well, truly alive and living in me.

The letter was headed:

A letter from my basket.
Written from the older, wised up but never wise or streetwise, Dougal to his younger self.

Dougal is the star of the novel Dougal’s Diary by Sarah Stevenson, published by Crooked Cat. 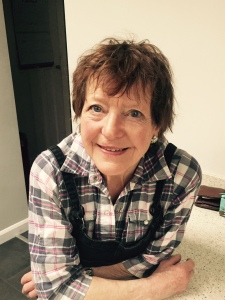 Joining the Bristol School of Dancing aged seven, Sarah spent most of her childhood dancing in prisons, theatres, old people’s homes and the Grand Palais in Paris. Later she trained as an actress, working with Mike Leigh and other distinguished directors. When the children arrived, she trained as a chef, and when they’d finally flown the nest, catered in Europe, Britain and the States, giving private dinner parties. Sarah still works as a cook and writes. 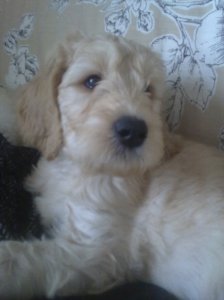 Has he chosen his owner well and landed on his paws? Dougal the Labradoodle puppy, a complete hypochondriac and Boris Johnson’s No 1 fan, arrives in Greenwich with great expectations.

He longs to travel the world on Virgin Atlantic, dine at royal banquets and either become a superstar and party the night away or work as a doorman at the Savoy.

Behaviour classes were never on his wish-list, neither were cliff-hanging experiences on the Thames, booze cruises to Calais or obsessions for eating socks.

Can he survive life with a chaotic owner and her eccentric friends? Can he deal with his jealousy when a foster puppy comes to stay? And as for his dreams, will they ever come true?

3 replies on “Letters from Elsewhere: Dougal”

Miriam,
Thank you from the bottom of my heart, for asking me to be on your blog.
I hadn’t written a letter before and found the whole thing a terrific experience.
Dougal.
Have had to give the boss’ details.

You’re welcome, Dougal. For a first letter, it’s amazing! Thank you so much for coming to visit.
Miriam