I just finished a book. It’s called The True Adventures of Gidon Lev by Julie Gray, and I want to sing its praises from the rooftops. 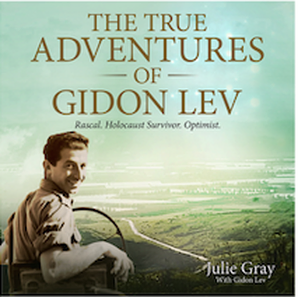 The True Adventures is an amazing book, unlike any other that I’ve read. It started out as an account of the full and unusual life of Gidon Lev, but very soon the author slotted into the story, as the two became, as Gray calls their relationship, “Loving Life Buddies.”

The subtitle for the book is: “Rascal. Holocaust Survivor. Optimist.” It tells you immediately that this read will be poignant and humorous. It might make you wonder: How can you have humour in a book about a Holocaust survivor? My answer, in the typical Jewish habit of answering a question with another question, is: How can you not have humour when the survivor is a person who always has a smile ready to burst out? In every photo I’ve seen of him, every video, that cheeky smile is what I notice first. This is a man who never wanted his Holocaust experiences to define him, and they don’t. He is so much more than that.

I love the way the book is arranged, with Gray’s voice interspersed with quotes from various people and in particular from Gidon himself. In the middle of Gidon’s and Julie’s 2019 tour of Prague, for example, Gidon tells of Prague in 1938. When Gidon disagrees with something Julie wrote, his version pops up, too.

The writing itself includes some gems, like this description of Gidon: “merry, a bit kooky, with great intentions, always headed toward adventure and sometimes tilting toward windmills.” Also: “Memory is a famously mysterious phenomenon; the more we tell our stories, the more details we add, edit, or exclude.” And: “Anybody could relate to stories about relationships or jobs with bad bosses or a fun vacation. But when you experience something very specific, such as war or the suicide of a loved one or cancer, you occupy a different space. A lonelier one.”

Gidon was adamant from the beginning: the book was to be about his whole life and not just the Holocaust. I agree with him and yet… The Holocaust parts are so important, so poignant, so inescapably, unavoidably present, that they were what made the book for me, and it was right that the topic of the Holocaust kept returning in the narrative. It had to. You can’t go through an experience like that and just move on. It has to influence everything that comes after.

The Israel parts felt closer, perhaps too close, because naturally there were sections I didn’t agree with. I found myself thinking: I’ve lived here for forty-four years; how dare this newcomer say such things! But I took myself to task, because of course she’s had time to create her own views, and living here gives her the right to express them. Still, when I read that the Snake Path leading to the top of Masada is dangerous, I shouted back, “It isn’t! I’ve climbed it and it isn’t!”

The personal parts of the book were interesting as other people’s lives often are. I couldn’t imagine being in some of the knots Gidon found himself in. I marvelled at his ability to disentangle himself, even if not always in the best way.

I learned plenty from the snippets of information dotted around. “The word holocaust,” Gray writes, “was first used to describe the Hamidian (or, in modern terms, Armenian) Massacres perpetrated by the Ottoman Turks from 1894 to 1896.”

I hardly need to add that I heartily recommend this book to everyone.

I received this book in exchange for an honest review. In no way did that affect my opinions, voiced above.

More information is available on the website. The photos are taken from there, with permission.