A lot has happened in the past eight years.

Eight years ago I had three children at school. Now they’re all grown up and following their different paths.

Eight years ago I was just beginning to write. Now I’ve been writing seriously for  some time.

Eight years ago I was working as a technical writer. Now I doubt I’ll return to that job.

The world is quite a different place from what it was eight years ago.

One thing has remained constant during that time. Ariel Sharon has remained in a coma. But today his health is deteriorating and his life is in danger. That’s today’s front page news. Eight years ago, Ariel Sharon was our prime minister. But eight years is a long time.

Thirty-eight years is even longer. When I went out today, I took this photo: 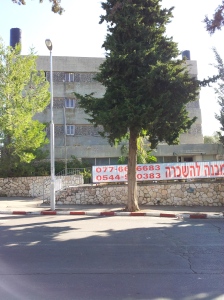 Thirty-eight years ago, when I visited Israel, hubby-to-be was living in that building. It was an absorption centre – a place for new immigrants to stay until they moved on. Now it’s empty and is being offered for rent. I wonder who would want to rent such a large building. The building opposite that used to be a bank is, according to an official notice, about to be torn down and replaced by a block of flats.

All around us building is going on. Our neighbours on both sides are making changes to their houses.

Things change, whether for good or for bad. Even Ariel Sharon can’t remain in a coma for ever.