A river of stones and a river of tears. Unconnected, or are they?

During the month of January, I wrote a small stone every day as part of the River of Stones project. I tried to take notice of details, using all my senses. I think I still have a lot to learn about writing descriptions. Then my mother died and I found it hard to notice the little things amongst all the big things.

I decided my small stones weren’t good enough to submit to the forthcoming anthology and didn’t send any. But then I commented on Cathy Walter’s excellent post about the project and the anthology, and she persuaded me to submit. So Fiona and Kaspa are going to include half of the small stone I posted on 7th January in the anthology. I’m pleased.

Do look at Cathy’s post for more information on the whole project and the anthology in particular.

The other river is the one that flowed from my eyes this morning, while I finished reading Sotah by Naomi Ragen. I don’t know if everyone would be so moved by it. It tells the story of a girl trapped in what appears to outsiders as a very oppressive society. It’s a society I don’t know so much about, but one that isn’t completely alien to me.

But really, the novel is about the girl coming to terms with the realisation that the world isn’t perfect, not even the part of the world that she has been taught to believe is perfect.

I think I could find little flaws in this novel if I wanted to. But I don’t want to, because it’s beautiful and I haven’t cried like that for a long time.

If there’s a connection between these two rivers, I think it lies in emotions, without which neither would have any significance.

A calm walk by the river past bobbing boats and a riverside pub.
I’ll remember that in my riverless hometown.

Some flights are boring.
Others are not.
The difference is caused by the person sitting next to me.
If only I had the confidence to take the initiative….

.
.
A day spent going nowhere.
We all need those days sometimes.
Tomorrow, I start moving again.
.
.

While walking, I hear many accents and languages, and see many colours.
Where I live, I sense these things, too.
But there, I don’t remark on them because I’m used to them.
Here, I do because London has changed since  I lived here.
The outsider notices more.

I feel guilty for not feeling the way I’m expected to feel.
They say it must be so hard and they’re all so sorry.
But I felt those feelings five years ago,
When no one said how sorry they were.
It’s not that I’m uncaring, just that I’ve got past that stage.

Straight from a house that’s much too hot to one that’s rather cold. I prefer the cold one. In winter, I expect to feel cold.

The coach navigates the narrow-laned London streets.
We pass Harrods, the Victoria and Albert, Hammersmith.
Outside London, rows of pretty houses.
England is always the same, or is it?
The seatbelt holds me in a tight grip.
Mobile phones ring, and conversations, too:
“We went to this restaurant last night. It was shit.”
“I should arrive about four ten.”
No, changes are everywhere. They happen with or without me.

I threw earth on my mother today.
Three times, I shovelled earth onto a spade and let it fall onto a wooden box deep, deep down.
Rest in peace, Mum. Your memory is blessed.

A vast expanse of white.
Greyish in parts.
Mounds.
Snow?
No.
Clouds seen from above.

Yes, I took a plane this morning on my way to my mother’s funeral.

Unfortunately, I won’t be able to post a small stone every day because I won’t always have an Internet connection. But I’ll continue to write them. 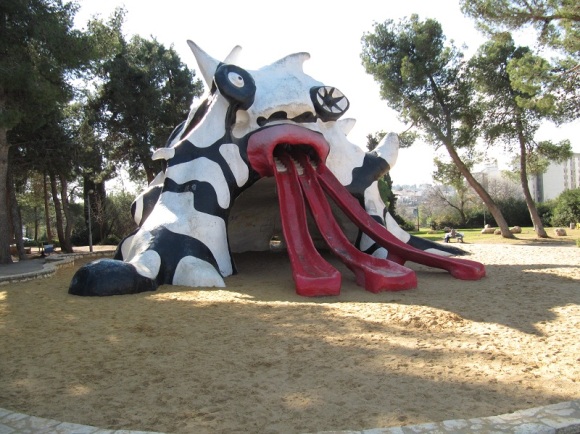 When you look back and think of all the sights that have changed, all the things that have happened, it’s comforting to see something that has remained the same. The monster has seen it all.