This post was inspired by this one by fellow writer, Joan Livingston. I’ve even used the same title. I hope she doesn’t mind.

I’ve moved around in my life, possibly not as much as Joan, but I did move countries. In fact I just celebrated that anniversary – forth-three years, which is at the same time hard to believe and feels obvious. As I was fairly young at the time of the move, I hadn’t acquired enough stuff to warrant sending a container. I just took what I could in my suitcase. 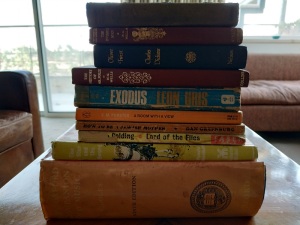 What books did I bring with me? I don’t think I brought all of these in one go, but I brought some back with me on each visit. So, these are all books I had in the UK, which arrived in Israel, either on that first day or soon afterwards, and have remained with me ever since. There might be more; this is what a cursory search produced:

The Golden Treasury of the Best Songs and Lyrical Poems in the English Language, selected and arranged by Francis Turner Palgrave

I inherited this book, published in 1952, from my big brother. There are poems by Tennyson, Marlowe, Shakespeare, Byron, Milton, Keats, Scott, Wordsworth, Browning, and more.

The Invisible Man by H.G. Wells

I haven’t read much science fiction, and this is probably my first read of the genre.

I haven’t read any of his books for a long time, but he used to be a favourite of mine.

The History of Mr. Polly by H.G. Wells

I had to read this for ‘O’ level English Lit. Even so, I enjoyed it.

This was probably one of the first things that influenced my decision to move to Israel.

A Room with a View by E.M. Forster

Funnily enough, I recently saw the film and the story came flooding back to me.

How to be a Jewish Mother by Dan Greenburg

I loved this book when I was quite little. I still remember at least one joke:

Give your son Marvin two sports shirts as a present. The first time he wears one of them, look at him sadly and say in your Basic Tone of Voice: “The other one you didn’t like?”

Lord of the Flies by William Golding

Another ‘O’ level book I enjoyed.

The Star and the Sword by Pamela Melnikoff

The book I would never lend! First of all, it was the first book I read in which I identified with the main characters. Even though it’s set in medieval times, the two Jewish children felt closer than any from books by Enid Blyton or any other story I’d read up to then. Also, this book contains a note to me from Gabriel Costa, a lovely man who lived in our street. He was in his nineties when he gave me the book in 1965, and still wrote book reviews for newspapers. 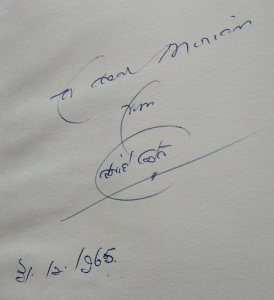 The Oxford Companion to Music by Percy A. Scholes

This hefty volume helped me get through ‘O’ and ‘A’ level music. Who would buy a book like that, these days, when all the information is available online?

How about you? What books have always accompanied you?

And while you’re thinking about that…

Remember my books, available from Amazon: Social Anxiety Revealed and Cultivating a Fuji.

7 replies on “Books I’ve Kept All These Years”

I enjoyed The History of Mr Polly, disliked Lord of the Flies intensely and would like to read A Room with a View. I’ve kept most of the books I had from the age of nine or ten – too many to list, and some are falling apart!

It’s hard to let them go, isn’t it, even if they’re falling apart!

It has been such a forever-and-ago time that I read Oliver Twist or Lord of the Flies. Lord of the Flies was the first book I read, though it was for AP English Lit, that really gave me cause to think, deeply, about humanity.

The book that has been with me in my last few moves, and I hope to keep or hand down to my daughter, is my collection of Narnia Chronicles.

I feel the same way about Lord of the Flies. I really felt for Piggy when I read it, recognising a common naivety.

I start today reading Uris’ book, but I see many criticism in the web and I hope to understand if it is reasonable or not 🤔

A very long time has passed since I read it. It’s probably not completely true to life, but I loved the story and it made me want to find out more.

In the meanwhile, I read half of it. Yes, maybe it is to favourable to hebrew point of view, but the story is interesting and I will deepen my knowledge about this part of the world.