I’m delighted to be joined today by John Burgess, who comes straight from the pages of Heathcliff by my good friend and fellow Crooked Cat author, Sue Barnard. Yes, that Heathcliff – the one and only. John has brought the letter he wrote to his wife.

I trust that this letter will find you in good health.  We have only been at sea for less than eight and forty hours, but already I am missing you beyond measure.

How is our dear little Emily?  Mr McDougal promised me that he would ensure that the two of you would be well cared for whilst I am away.   I know he is a man of his word, and as you well know he has already been my saviour on more than one occasion.

I was very nervous about going to sea again, my love – not just because of the prospect of having to leave you (especially in view of your condition), but also because it is so long since I was last on a ship. But it has proved to be not so bad as I had feared.  I was seasick at first, but thankfully that has now passed.  Our voyage is going well so far.  Captain Trelawney is, as one would expect, kept extremely busy with the day-to-day running of the ship, but young Heathcliff has been keeping me company.  He is a very competent sailor, despite having had no previous experience before he came to Liverpool.

All the same, I am rather worried about him.  For his age (I believe he is around seventeen or so), he is surprisingly uneducated.  When I told him that you were four months gone with child, he looked bewildered and asked me what I meant.  I never imagined that I should be the one who would have to educate anyone about the facts of life.

Heathcliff seemed surprised – even a little shocked – by what I explained, but afterwards he thanked me, then told me why he had first come to Liverpool.  It transpires that he was running away from a girl who broke his heart by saying it would degrade her to marry him.  I have often thought that he seems to be a troubled soul, and now I am beginning to understand why.

I will post this letter when we next arrive in port, and will write to you again later during the trip.  In the meantime, please take good care of yourself and of little Emily.  I am counting the hours until I see you both again. 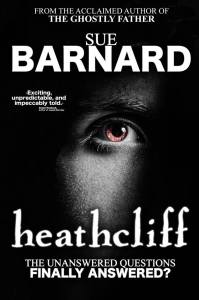 What happened to Heathcliff during the three years when he disappeared from Wuthering Heights?  And who were his parents?  Possible answers to these questions are offered in Sue Barnard’s latest work, Heathcliff, due for publication on 30th July, 2018.

Sue Barnard is a British novelist, editor and award-winning poet. She was born in North Wales but has spent most of her life in and around Manchester. After graduating from Durham University, where she studied French and Italian, Sue got married then had a variety of office jobs before becoming a full-time parent. If she had her way, the phrase “non-working mother” would be banned from the English language.

Sue has a mind which is sufficiently warped as to be capable of compiling questions for BBC Radio 4’s fiendishly difficult “Round Britain Quiz”. This once caused one of her sons to describe her as “professionally weird.” The label has stuck.

In addition to working as an editor for Crooked Cat Books, Sue is the author of four novels apart from Heathcliff: The Ghostly Father, Nice Girls Don’t, The Unkindest Cut of All and Never on Saturday.

She is also very interested in Family History. Her own background is far stranger than any work of fiction; she’d write a book about it if she thought anybody would believe her.

Sue lives in Cheshire, UK, with her extremely patient husband and a large collection of unfinished scribblings.

I was lucky enough to read an earlier version of Heathcliff and have begun reading the final version. It’s an excellent read, whether or not you’ve read Wuthering Heights.

If you hurry over to Amazon, you might still catch the tail end of Crooked Cat’s Summer Sale. Sue’s books (apart from Heathcliff), my books and many others are in the sale.