This is one of several posts about my recent trip to Ethiopia. The others, so far, are here and here.

Naturally, we flew from Tel-Aviv to Addis Ababa. In just four hours – less than the time it takes to fly to London – we landed in another world. This shouldn’t have surprised me. I’ve crossed borders to Egypt and Jordan, where differences are also obvious. But Ethiopia is more different; and more friendly.

There were also some internal flights. Security is tight. If you don’t like taking your shoes off, imagine having to do it twice before being allowed on a plane. We got to see some tiny airports. In Arba Minch Airport, the second security check was done by hand, reminding me of the not-so-good old days. A woman rummaged in my rucksack and brought out 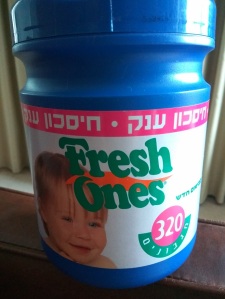 “What’s this?” she asked. “It’s for wiping hands,” I replied, miming the action in case she was still in some doubt. She tried to open it by unscrewing the top – which isn’t how it works – but soon gave up. Some of the Chinese had walkie-talkies, which were taken away from them, hopefully to be returned after the flight.

Then we sat in the airport lounge. 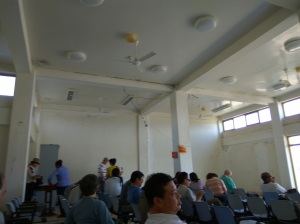 On the left, you can see them rummaging. In the centre, a light hanging from the ceiling is tied to a column. Good thing the hall is “Under mentenance.”

All the flights were as comfortable as flights can be and seemed safe. The views were interesting and varied. This is an aerial photo,  although you wouldn’t know. It was taken before landing at Arba Minch.

On good roads, we travelled mostly by minibus. The advantage was that the guide could tell us things on the way.

In the desert and other unpaved roads, we were separated into jeeps. They were nice and modern and the rides were as comfortable as they could be in the circumstances. Only once did a jeep get stuck in the sand. 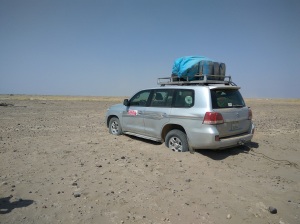 Addis Ababa has a light railway system. David (hubby), who is keen on trains, told the guide how he wished he could travel on one of the trains to get a feel for it. “Don’t wish too hard,” the guide replied. “Trains come about once every thirty minutes and they’re extremely crowded.”

We were taken on two very different boat rides. The first was to cross the Omo River to reach Wakonos Village, which is arguably in Kenya. They gave us a choice of boats and we chose to travel like the natives in one of these:

It wasn’t comfortable stepping in mud to reach the boat, squeezing in, knees raised, but we made it to the other side and our bottoms soon dried in the sun.

The other boat, from which we viewed crocodiles and hippopotamuses on Lake Chamo, was more comfortable. 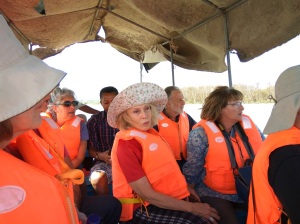