Can you name a single book that everyone likes? I very much doubt it. Readers have widely differing tastes. You only have to read the reviews of any book to see that. 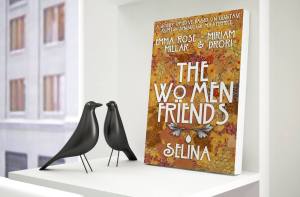 So why am I telling you that The Women Friends: Selina isn’t for everyone? Because it’s probably more controversial than some. It’s also very different from my first novel: Neither Here Nor There. It follows the fictional story of a woman struggling to survive in a strange environment in traumatic times. She gets involved in things some readers might not want to read about.

However, while little is known of the two models in Klimt’s painting: The Women Friends, the story remains true to what is known of the women who inspired the great artist, as well as to the turbulent times in which it is set.

One reader, in the first review of the book, describes the book brilliantly, although there are parts that I didn’t see in the same way. We all read different things into the same books.

Up to now, I haven’t made much of the fact that The Women Friends: Selina is a finalist in the Goethe Awards, because my name didn’t appear on the list. I’m happy to say that has now been rectified, and Emma and I are delighted that the book has reached this stage.

2 replies on “Warning: This book isn’t for everyone”

It would be interesting to find a book that every reader is happy with. But unfortunately, it isn’t possible to please all the people all of the time.
Congrats on your finalist listing for the Goethe Awards!!