I’m delighted to welcome Hannah, who seems to feel she has to plead her case with you. She is the almost mother-in-law of Jen, main character of recently released Taming Tom Jones by Margaret K Johnson. But she’s more than that, as you’ll see.

Over to you, Hannah.

I know what you think – that I should tell Jen the truth. Well, I’m sorry, but I can’t do that. I care too much about her, and I fought so very hard to keep her in my life after what Luther did.

I don’t remember being so angry with my son before, ever. I could hardly take in what he was saying to me, standing there in his wedding clothes, unable to look me in the face. It was as if he was six years old all over again. Five. I know it was you with that pea shooter, Luther; don’t lie to me. Martha saw you, behind the wall.

I wanted to shake him; to take him by the lapels of his expensive morning suit and make his teeth rattle. I wanted to yell. How could you do such a thing to that wonderful girl? I’m so ashamed of you!

But then he began to cry; great choking sobs that forced me to comfort him. Because after all, I was his mother, and whether it was his fault or not, he had lost his Jenny. She would not be marrying him that afternoon. She would not be moving in to that new home the two of them had spent months locating. She would not be having his children.

But there and then, while I held him in my arms and let him weep, I decided I would not lose touch with her. I’d loved Jenny from the very first moment Luther brought her home to meet me, and she would be – had to be – a part of my life still.

I have to go out, I told him as soon as he began to pull out of my arms, and I wouldn’t tell him where I was going, even though I think he knew. I left him with his best man and I went to Jenny’s house and forced Marcia to let me see her. It was the best thing I ever did, and now, even though my son isn’t the father of her child, I shall be its grandmother in every way possible. I look forward to that so very much.

With my good wishes and my thanks, in expectation that you will do as I ask. 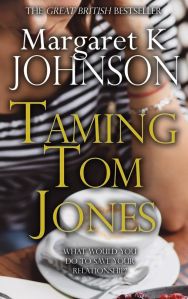 Jen’s partner Michael has never been in a relationship for more than four years, so with their fourth anniversary coming up, she’s getting understandably nervous. Especially as she’s just discovered she’s pregnant, and she knows Michael doesn’t want any more children other than Kyle, his teenage son.

Jen means to tell Michael about the baby right away, but then he comes home on a brand new motorbike, having traded in his sensible car, and the moment is lost. Is Michael having an early mid-life crisis?

Jen decides to do some detective work about Michael’s exes in an effort to save their relationship, and embarks on a journey that will take her as far afield as North Norfolk and Cuba. But she has no idea of the can of worms she’s about to open.

Why do all Michael’s relationships break up? And what’s the big secret he’s hiding?

Taming Tom Jones can be bought at Amazon. 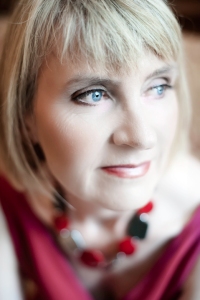 Margaret K Johnson began writing after finishing at Art College to support her career as an artist. Writing quickly replaced painting as her major passion, and these days her  canvasses lay neglected in her studio. She is the author of women’s fiction, stage plays and many original fiction readers in various genres for people learning to speak English. Margaret also teaches fiction writing and has an MA in Creative Writing (Scriptwriting) from the University of East Anglia. She lives in Norwich, UK with her partner and their bouncy son and dog.

10 replies on “Letters from Elsewhere: Hannah”

Reblogged this on Margaret K Johnson and commented:
A letter from Hannah, Jen’s almost mother-in-law in Taming Tom Jones.

Thanks for letting me have a 2nd appearance on your excellent Letters feature, Miriam! Much appreciated. 🙂

Thanks for reincarnating, Margaret! 🙂

I loved Hannah – the sort of, but loving mother-figure all motherless children should have.

Sounds like a very special mother- in- law. Tweeted.

She is, Susan! Thanks for commenting. 🙂

What a great letter, very intriguing, and now I want to know more 🙂

Thank you, Annalisa! Very kind of you to say so. And of course, I wanted to intrigue you and to make you want to know more! 🙂