No, this post is not about daleks. It’s about something real and serious. It’s about what the Israeli government is doing to a part of its population.

There. I said it. All those things you heard on the news are true.

But that’s what the sign said. I read it. I needed to walk along the String Bridge on my way from one errand to the next, this morning. I looked down at the area where yesterday a sea of black hats swayed in prayer and demonstration and there it was: EXTERMINATION. 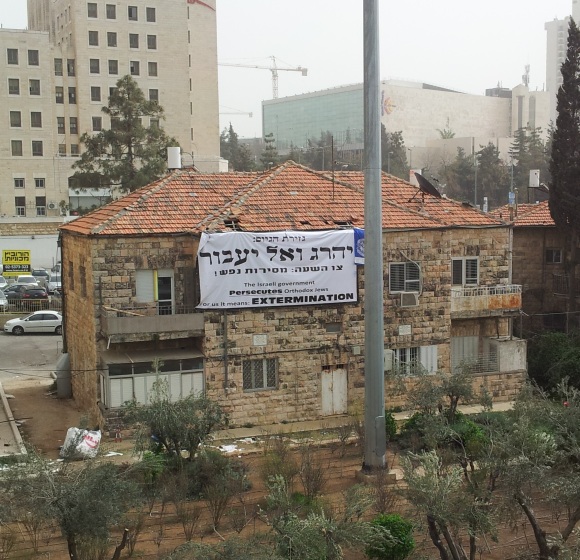 OK, so they don’t actually mean they’re being exterminated. They mean that what the government is planning to do to them will cause them to cease to exist as they do now.

And what is this evil government plan? The government wants to conscript all young people, including those who belong to the Haredi community. That doesn’t necessarily mean conscription to the army. It can also be for what’s called here National Service or what you might call Community Service. All the government is saying is that one law should apply to all. All young people should give two years of their time to serve the community or the country.

And probably, if those young people from the Haredi community are conscripted in this way, it will change the whole community in certain ways. I’m not sure that’s such a bad thing.

That’s interesting. There is a Christian sect here (locally) which isolates itself with disturbing consequences for the young people. Community service would change them too.

It seems as if those in power are afraid of what such a change would do to their authority. The story of the human race….